What would a M.I. Hummel theme be without including one for sports. One of our club members has collected all of those that revolve around a soccer ball so this page is in honor of them. So far, I have only been able to locate a few (18) such figurines that represent this category. This page does not include the Berta Hummel items. 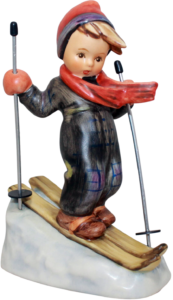 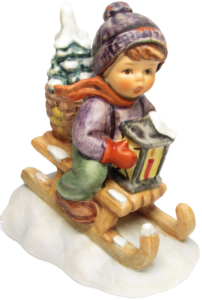 396 2/0 – 3¼”
396 – 5¾”
396/I – 5¾”
396/III – 9″
This figurine was first designed by master sculptor Gerhard Skrobek in 1970 and released in 1972. In the Summer of 2002 edition of the INSIGHTS magazine, Skrobek considered this piece his favorite design of the many he modeled during his career. A smaller version was released in 1982. On the 75th anniversary of Sister Hummel’s birth, this was one of 50 figurines to bear the “75th Anniversary”  backstamp and only 75 of them were available in North America with this backstamp being individually hand numbered with a golden backstamp and a map of North America. A special porcelain plaque was included with a “75 Years of M.I. Hummel” certificate. 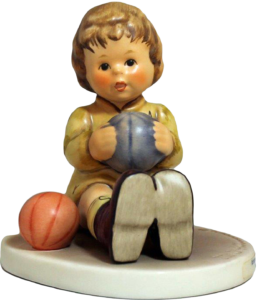 Height – 3½”
Closed Edition (CE)
Modeled by master sculptor Helmut Fischer in 1990, this figurine was released in 1998 as an exclusive for members of the M.I. Hummel Club only. The underside has a special decal that reads, “EXCLUSIVE EDITION 1998/99 M.I. HUMMEL CLUB.” The issue price in 1998 was $260. This figurine is now listed as a Closed Edition (CE).

Height – 3½”
Crafted by master sculptor Helmut Fischer in 1997 and carries the 1997 incised copyright date. It was first issued in 1998 and those that were released that year carry the “First Issue 1998 special backstamp and the TM=K-7 trademark. The original issue price was $80. 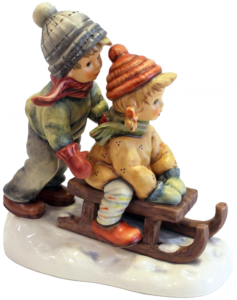 Height – 6¼”
Winter Days was issued in 2004 with an incised copyright date of 2004 and has a “First Issue 2004” backstamp with a TMK-8 trademark on this first year. There is a “Winter Days” base with Fenton Art Glass evergreens available for the figurine. 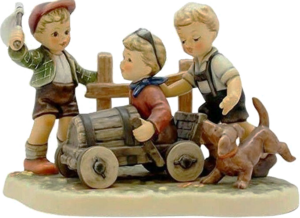 Height – 7″
The Soap Box Derby was the first in the “Moments in Time” series that celebrates childhood. It was modeled by master sculptor Marion Huschka in 2001 and first available in the Fall of 2002. The large figurine bears the “First Issue 2002” and “Moments in Time” backstamps and the incised 2001 copyright date. This was limited to the one year of production only. 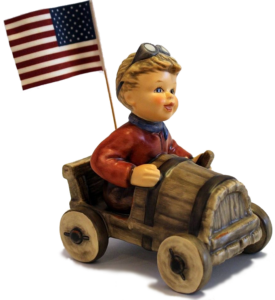 Height – 4¾”
This piece was sculpted by master sculptor Marion Huschka and was introduced in 2003 with the TMK-8 trademark. It illustrates the American spirit, including the American flag, and the pastime of soapbox derby racing 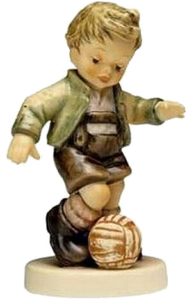 Height – 4¼”
Introduced with the TMK-8 trademark in 2005, this is represented with a young boy dressed in the traditional Bavarian lederhosen with his eye on the ball and ready to score for his team. This figurine is a companion piece to HUM 2212 Keeper of the Goal, HUM 2274 Ready to Play and HUM 2265 She Caught It! Collect all four and start your own team!

Height – 4½”
Created in 2003 by master sculptor Anette Barth, you can find this 4½ inch figurine on the Hummel Gifts website for $189. This one features a boy holding soccer ball, a tribute to Germany’s love of the sport of soccer. The year 2011 would have been Sister Hummels 75th birthday and Manufaktur Rödental selected 50 figurines to bear the “75th Anniversary” backstamp. This was one of those fifty. Only 75 of this figurine were made available to the North American market with this special backstamp with each one being individually hand numbered. A special porcelain plaque was included along with a “75 Years of M.I. Hummel” certificate. 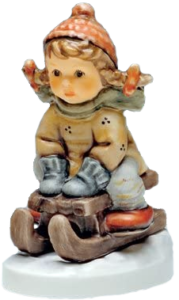 Height – 3¼”
Sleigh Ride was made available to the European market in the Fall of 2005 and then in 2006 for the North American Market with the TMK-8 trademark. As part of the “Four Seasons” collector series, it represents the Wintertime Wonders set. The base features a special snowflake giving tribute to that season. Each of the “Four Seasons” series has a special backstamp representing the season the figurine is a part of. 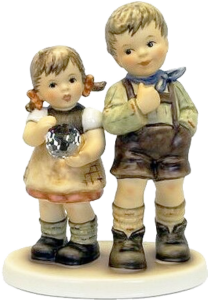 Height – 4¾”
This is the fifth in the “Swarovski” series limited to 7,500 pieces introduced in 2008. It shows a young girl who caught a crystal soccer ball and a young boy looking quite impressed by this. This TMK-8 trademark figurine comes with a certificate of authenticity as well as  a keepsake tin box.

Height – 4¾”
This figurine was sculpted by Marion Huschka and is the first to feature a young girl in lederhosen ready to play soccer and was released in 2007. It is part of the “Premier” collection, it is a tribute to female athletes all over the world made to honor the lover of soccer in Germany. She is a companion to HUM 2211 Fancy Footwork, HUM 2212 Keeper of the Goal, and HUM 2265 She Caught It! 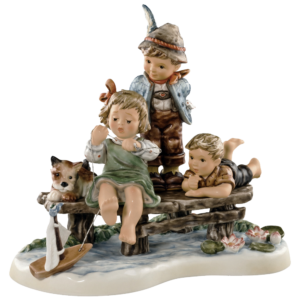 Height – 9″
This figurine is one of the first to be made under the new management of Manufaktur Rödental and is the eighth piece in the “Moments in Time” series. There were only 2,000 pieces made available worldwide. It has the “100 Years M.I. Hummel” backstamp with the TMK-9 trademark and a numbered certificate of authenticity. 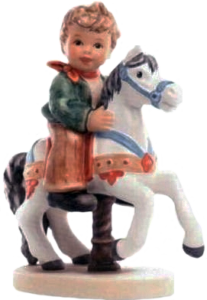 Height – 4¾”
As an exclusive figurine to M.I. Hummel Club year 38, this is the fourth and final figurine in the “Carousel” series released in the Summer of 2013 sold for a retail of $379. It features a little boy on a carousel horse with the TMK-9 trademark and the exclusive 2013 M.I. Hummel Club backstamp. A carousel, made in Asia, has lights and plays the “Carousel Waltz” available for an extra $139 retail. 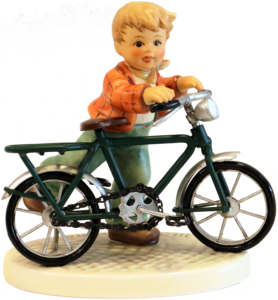 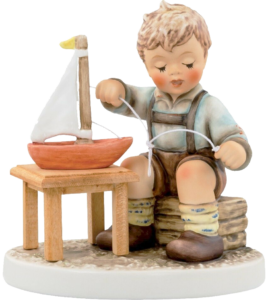 Height – 4″
This is the fourth of the “Founder’s Collection” and features a young boy at his workbench making sailors knots in a rope so that he would be able to launch his sailboat. It has a wooden table and a piece of rope making it a mixed media figurine. It has the special “Founder’s Collection” series backstamp and the TMK-9 trademark and is numbered limited to the number of orders placed by March 2013 with a numbered certificate of authenticity. 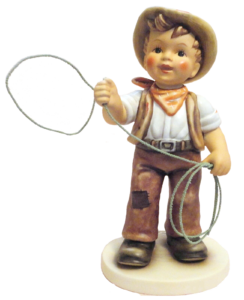 Height – 6″
Representing the second in a “Country” series with the United States of America, Rodeo Roundup was released in 2013. It depicts a young boy dressed in western cowboy attire as an example of mixed media. It has the TMK-9 trademark along with the “Country” backstamp and U.S. flag.