Here is one idea that you might want to consider or perhaps some of these may give you an idea of your own. This list is simply a suggestion on a selection of Hummel figurines that include that very special, the cat. This is a strong representative of 15 M.I. Hummels that include the long tailed bundle of fun. This is what I was able to discover lately but am sure that there may be a few more to be found. This list begins with the lower number HUMs and increases as you scroll down. It is also, in some ways, an historical chronology of the plaques as they were created.

Cats have long been a favorite pet of people all over the world and what better way to enjoy seeing them than with a Hummel figurine. The master sculptors did a great job of adding this sly but fun pet most of us have had the pleasure of enjoying. 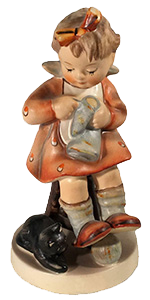 Modeled in 1939 by Arthur Möeller, this is the only figurine in current production with a cat. This model is a favorite for feline fanciers because, until recently, was the only M.I. Hummel that includes a cat that would like playing with the yarn if her mistress did not have both feet firmly planted on it. This has not been consistently listed in all catalogs over the years, even though it is found with all trademarks and has been in the line since at least 1947. A similar figurine that may be released in the future was copyrighted as GP12634 on July 18, 1956, as “Mother’s Good Helper” and assigned the number HUM 325. From the latest editions of the book HUMMEL by Robert L. Miller and Eric Ehrmann, this appears to be almost identical to Sister Hummel’s original drawing, which included a table and a cat positioned differently. Graphics include a large size poster, T29265, by Verlag Ars Sacra who own the original drawing.

This figurine was originally modeled by master sculptor Gerhard Skrobek in July 1957 and the first sample was painted by artist Franz Kirchner in August 1957. The prototype piece that carried the TMK-2 has been exhibited several places, including the 1980 Eaton Festival. Originally called “Naughty Boy” on old factory records but later changed to “Being Punished.” The German name of Jung im Karzar translates as “Boy in Jail.” This piece has a hole on the back for hanging as a plaque or will sit upright on the base. Has an incised 1955 copyright date on the back. The form of this piece is unique in that it is designed so that it may be used either as a standing figurine or hug as a wall plaque by the hole in the flat back. This is the third piece showing a cat. This early sample model pictured here has the “full bee” TMK-2 trademark and is part of the Robert L. Miller collection. 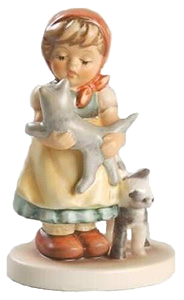 First released in the U.S. market in the spring of 1998 for the Spring Open House event at participating retailers in the U.S. Modeled by master sculptor Helmut Fischer in 1996. It has an incised 1996 copyright date along with the TMK-7 trademark. Produced in a sequentially numbered limited edition of 25,000 pieces worldwide with 15,000 in the U.S. The official issue price was $198 in 1998. Also known as “Kitty Kats.” This was only the second figurine with a cat made publicly available since the introduction of HUM 133 in 1947 and a welcome addition to all of the collectors that love cats and made all the more special due to the limited issue. 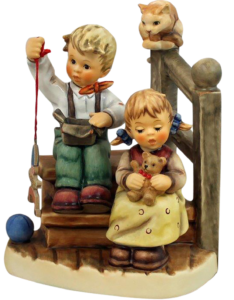 This is the premiere piece in the Wonder of Childhood Collection. Modeled by master sculptor Helmut Fischer in 1997, this figurine was the exclusive annual edition for members of the M.I. Hummel Club in the club year 2000-2001 and for that one year only. It is a mixed media with the traditional M.I. Hummel earthenware in combination with a painted wooden toy on a wooden base with an engraved brass plaque. It carries an incised 1997 copyright date as well as the club exclusive backstamp and TMK-8. As with any of the club exclusives, it was received by way of a redemption card. The original issue was priced at $695. 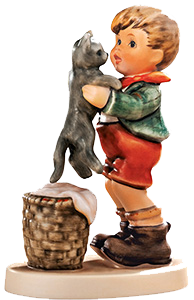 First released in the U.S. market in the fall of 2001. Modeled by master sculptor Marion Huschka in 1997. It has an incised 1997 copyright date along with the TMK-8 trademark and the “First Issue 2002” oval decal backstamp. The official issue price was $195 in 2001. This is a current figurine that is available from Hummel Gifts and introduced as “Cat fans rejoice! A special M.I. Hummel figurine, featuring a feline, is sure to melt your heart. This little boy is obviously delighted with his new pet. And someone you know will be just as delighted with Kitty Kisses as a gift.” 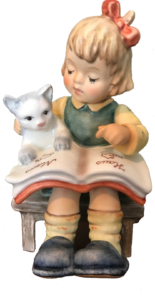 Height – 5¼”
Issued in the fall of 2010 as a TMK-9 trademark, this figurine depicts a little girl reading to her kitten where the two are snuggled together with the cat’s paws on the page of the book. The two are sitting on a brown bench with a red heart carved at the ends. The bench is made in Asia. The listed issue retail price was $299. 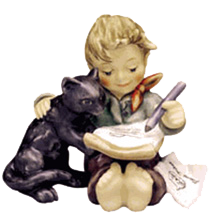 Height – 3½”
Suggested value is $175.00-$300.00
Released in 2003, this figurine became very collectible after the company announced that they had painted the cat the wrong color on the “First Issue 2003” pieces. They said that fewer than 5,000 pieces had been painted with a black cat when it should have been painted grey. It is expected that these black cats will become more valuable due to their rarity. This is considered to be a companion piece to HUM 800; Proud Moments which was released in the year 2000. 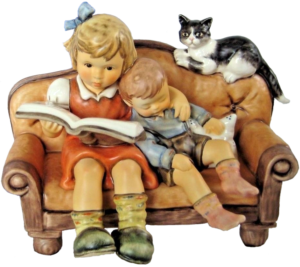 Height – 6¼”
Story Time was sculpted by master sculptor Helmut Fischer and required fourteen molds to create this quite complex figurine of a little girl reading to her younger brother, who has fallen asleep no a couch with a grey and white cat sitting atop the couch. This is the first in the series “Moments in Time Series VII” in a worldwide limited edition of only 3,000 pieces that was released in 2008 as a trademark of TMK-8. Each of these figurines was individually numbered and comes with a certified certificate. 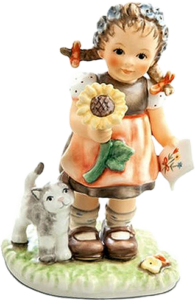 Height – 5½”
This figurine was released in April of 2010 and shows a young girl with her kitten to her right leg while she holds a sunflower and a card she drew with flowers on it. This is a companion piece to HUM 2309/B Only for You where the two pieces fit together at the base to create the illusion of being one piece. 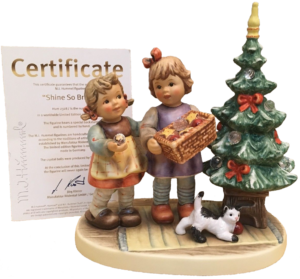 Height – 7″
This figurine was released in a worldwide limited edition of only 2,000 figurines in 2011 depicting two sisters trimming a Christmas tree with a basketful of ornaments. There are eight Swarovski Crystal ornaments, six on the tree, one in the basket, and one in the little girl’s hand. A black and white kitten is playing on the rug at the feet of the girl nearest the tree. A certificate accompanies each figurine with information on each. 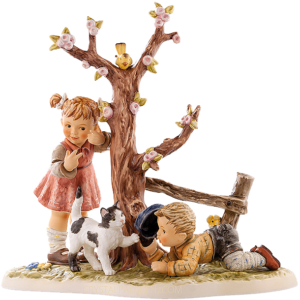 Height – 9¼”
This figurine is the eleventh edition of the “Moments in Time” with a TMK-9 trademark in a limited edition of only 1,999 pieces worldwide. Each figurine is numbered with a certificate showing the authenticity. It shows a little boy and girl playing a game of hide-and-seek with the young girl counting to ten and the little boy hiding. A  black and white cat tries to give away the little boy’s hiding place while the little yellow bird sitting in the tree watches. 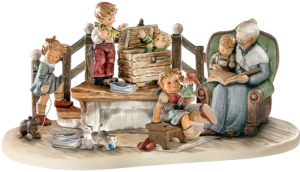 Height – 9″
This figurine was produced with a worldwide limited edition of only 399 pieces and has a trademark of TMK-9. Grandma’s Treasures shows an old fashioned scene at Grandma’s house with a toddler sitting on her lap to have a story read to them. The siblings and / or cousins come to visit and explore the many treasures found at Grandma’s house, but especially in the attic. Even the two little kittens find things to play with. The retail price for this complicated figurine was $4,990. You may have noticed the similarity of this figurine with a simpler one as HUM 620 A Story From Grandma. 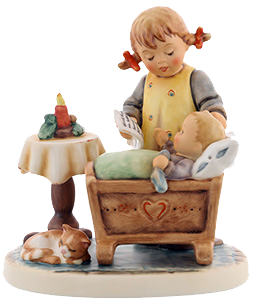 Suggested retail price is $580.00
The following is the description from Hummel Gifts. “With our winter novelty, you can especially enjoy the contemplative weeks to come, with candlelight and the first homemade cookies. You are sure to find a nice place to keep an eye on these completely new “Hummel”.
When the first candle is lit on the First Advent Sunday, it is always a very special moment. Because they are not the only ones looking forward to the coming weeks and especially to Christmas. Master sculptor Marion Huschka has created a detailed figurine that could hardly be Christmas season begins and children – more peaceful: the baby lies in the cradle, looked after by the older sister, who lovingly caresses the baby’s head. the cat has rolled up blissfully at the foot of the little table carrying the first Advent candle. The figurine “Light The First Candle” is the first of a series that will be continued next year with another Advent figurine with two candles.”