I was curious as to what figurines were created as an ashtray since I have a few and had no idea there were so many. I was able to locate 8 individual figures listed here but there may be more added as the information provides. This list begins with the lower number HUMs and increases as you scroll down. It is also, in some ways, an historical chronology of the Hummels as they were created. Enjoy.

There are two major sizes of ashtrays that I have noticed; the smaller size as indicated with HUM 33 Joyful and then the larger bowl with HUM 34 Boy with Raven (Singing Lesson). Since I have never smoked, I find these useful for keeping small, important items that I need handy and these make just the right item for having a reliable place to put them. It’s a good way to start the day when I go to retrieve such an item from the “Hummel bowl” and see the cute face guarding the items. 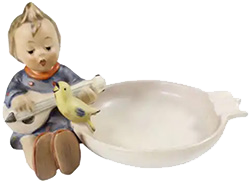 The numbering sequence indicates that this figure was used for the first ashtray introduced by Goebel in this line. In addition, this figure was used on the ashtray before it became the separate figurine, HUM 53 Joyful or the HUM III/53 Candy Box. It was also used in the designs of two model numbers for which there is no record of production, Bookends, HUM 120 and another design of ashtray, HUM 216. Some sources have indicated that this is a likely subject for the Annual Bell. Designed and issued before 1950, it is found in all trademarks with minor variations. The German name is Ascher, Gesangsprobe, or “Ashtray, Singing Rehearsal.” Another reported name is “Boy with Mandolin and Bird.” The original drawing for all of these related items is owned by Verlag Ars Sacra and is available in postcards as #14284. This piece has been temporarily removed from current production effective December 31, 1984 with the no date for reinstatement given. 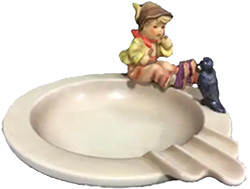 This example was the second ashtray in the line and also produced before its companion figurine, HUM 63. Both pieces were made before World War II. HUM 34 is found in all trademarks with little variation in size, design, or coloring. A 1950 U.S. catalog refers to this piece as “Ashtray, Boy with Raven” which highlights the difference between the ashtray and the figurine, HUM 63, the candy box, HUM III/63, and the bas-relief of this motif used on the 1979 Annual Plate, HUM 272. The ashtray is the only adaptation of this motif that shows a raven. All the others use a differently shaped yellow bird. When Sister Hummel made her original drawing, which is now owned by Ars Sacra, it was done with a yellow bird up in a tree as depicted on the 1979 Plate. Some minor variations may be encountered in comparing examples of different ages. The German name is Ash, ‘s stimmt net, or “It’s Not Right.” The original drawing was reproduced by Ars Sacra as postcard #14701.

Cancelled Number (CN)
Recent research of the factory records by collector Robert Miller indicates this number was provisionally assigned to a design similar to the ashtray Singing Lesson, HUM 34 but after further consideration, it was cancelled 31 October, 1935. No prototypes or examples have yet to be found. If the improbable discovery should happen, the value would be probably somewhere in the low four-digit range. Since prototypes of other cancelled numbers such as HUM 77 have been found in private hands, someday an example of this ashtray may be available for private purchase. 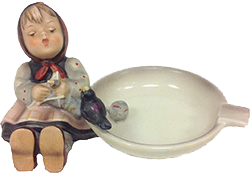 Another case where the motif was probably first used on a functional piece before it was introduced as the separate figurine, HUM 69 Happy Pastime. Sister Hummel’s original drawing shows the bird in an adjacent tree, somewhat as it is positioned in the 1978 Annual Plate which has the same motif in bas-relief form. First modeled by master sculptor Arthur Möeller in 1936, it was “temporarily withdrawn” (TW) from production on 31 December 1989. An early catalog shows this piece as being only 8 cm high as compared to 9 cm or 3½“ high at present. This was first named “Ashtray with Knitter,” with other names referenced as “Little Knitter,” and “Knitting Liesl,” with the translation from the German name Stickliesl. It is reported that one of the early marks, TMK-1, had the incised facsimile signature on the back of the tray. The current models have the signature on the back of the figure. Such deviations and small changes that may have occurred in design are allowed for in the Price List. However, there is always the possibility of something not yet recorded. The figurine itself, HUM 69, has been used for an illustration for the month of December in the 1969 calendar. The figure used on this ashtray is a figure similar to the HUM 69 Happy Pastime except that the bird is positioned on the edge of the tray rather than on the girl’s leg. 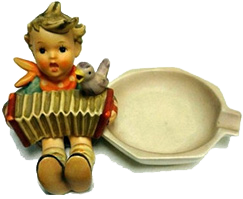 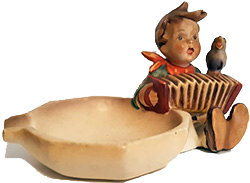 This piece is an ashtray with a figure very much like HUM 110 Lets’ Sing positioned at the edge of the dish. It is found with the figure on either the right or the left side of the tray. Both styles can be found with the TMK-2 Full Bee trademark. The older ones have the figure on the right side. First modeled in 1938 by master sculptor Reinhold Unger. It was restyled in 1959 by master sculptor Theo R. Menzenbach with the ashtray on the right. Its popularity has jumped since the motif was used no the First Annual Bell, HUM 700 in 1978. When found with the ashtray on the boy’s right (viewer’s left) and Crown mark, the value is estimated to be in the high hundreds. The ones with the current marks have the tray on the boy’s left (viewer’s right). One interesting example has been found in the new style (ashtray on the boy’s left) but with the TMK-2 trademark. This model has been in the line since the last Thirties. 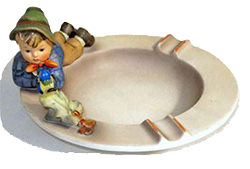 This ashtray was modeled by master sculptor Arthur Möeller in 1946. Only slight variations exist in color and construction through the years and there are no major differences between the old and new models. While this has been found in all trademarks, it was not always cataloged, possibly due to low demand. The boy lying prone differs from HUM34, Singing Lesson Ashtray, in which the boy is seated as in the figurine HUM 63, the HUM III/63 candy box, and the HUM 272 1979 Annual Bell. The bird also varies in design and color. This item was “temporarily withdrawn” (TW) from production on 31 December 1989. The German phrase, Junge mit Vogelmeans “Boy with Bird.” The original drawing is owned by Ars Sacra who has published a reproduction of the drawing as a postcard #5862.

Closed Number (CN)
This is reported as not likely to be found. According to Goebel’s factory records, this number was being considered for a variation of HUM 33 Joyful, but for some unknown reason it was listed as a closed number (CN) 10 September 1951. Factory records indicate Joyful, ashtray without a rest for a cigarette. At present, there is no known example, but this situation may change as it has for other CNs and the alert collector who locates one will have something valued in the mid four-digit range. 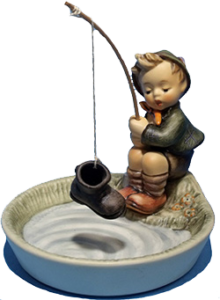 This figurine was first released in the U.S. market in 1985. It was originally named “The Fisherman” on old factory records, but later changed to “Just Fishing.” Modeled by mast sculptor Gerhard Skrobek in 1964, it has an incised 1965 copyright date on the bottom. The original issue price was $85 in 1985 and was first listed as an ashtray on Goebel price lists but later changed to a figurine listing. This figurine was included in this theme since it looks very much like an ashtray.