Knowing your M.I. Hummel figurine resources can come in handy when you run across one you have not see before. Here are a few of the older and less known “MELs” that other people have found with some being one-of-a-kind, a few are Possible Future Editions (PFE) while others offer no explanation. I thought it would be fun to show some of what you might keep your eyes open for located on the Internet from time to time. Several include the asking price where this was provided along with the date found to give you some idea of the dollar range you might expect to see. This is just a sampling from the very many figurines you may run across upon your searching. They are listed in numerical order by their mold numbers for your convenience.

Most of these MELs were created as prototypes with various colorization and poses to present as samples to the sisters at the Sießen Convent with only a few being accepted in the very beginning of the Hummel figurine creations. Some of these samples made their way as gifts to the workers and were considered by them as “trinkets” as I was told.  You may find one of these if you keep your eyes open and books handy. The following figurines are some good examples of what to look that have recently become available.  Be sure to visit the What’s New web page to see what has been added to this site that you might have missed. 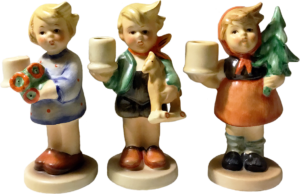 The Mel figurine series were considered a very early “catch all” for the rejected items as well as possible experimental including two International designs. Notice that the word “Mel” is the last three letters of Hummel. The Mel 1 – girl with nosegay, Mel 2 – girl with fir tree and Mel 3 – boy with horse were the more common of all the Mel figurines and these three were modeled by master sculptor Reinhold Unger in 1939. The rear view of Mel 1 and Mel 3 show the word “Mel” on the base. Click the image to see it better. Robert Miller placed a value of between $300 and $500 each on these in 2003. In the mid-1950s, these three were remodeled by master sculptor Gerhard Skrobek and assigned the model numbers HUM 115 – Girl with Nosegay, HUM 116 – Girl with Fir Tree and HUM 117 – Boy with Horse candlesticks with the M.I. Hummel signature. These were designed from the original drawings of Sister M.I. Hummel but some reason were not approved by the Sießen Convent. There were 29 different Mel figurines accounted for with the last one bearing the number 54 so be on the lookout for the remaining 25 unaccounted for. Some of these were appraised for upwards of $15,000 each! These three were on eBay with a Buy It Now option of $1,000. The first two are of the Crown TMK-1 trademark and the third is a Full Bee TMK-2 trademark.

The figurine is part of the Donald Deeks Collection held at auction on Saturday, 16 January 2021 in Clearwater, Florida and sold for $100.00 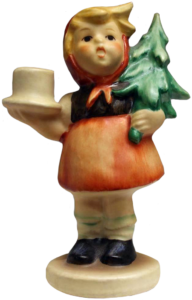 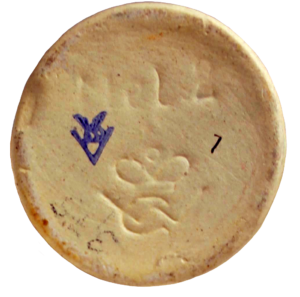 Height – 3½”
Here is another example of the MEL series with MEL 3 – Girl with Fir Tree.  As mentioned previously, the MEL figurines were some of the earlier “What If’s” and were very limited in production and may be one-of-a-kind in some cases. According to “Luckey’s Hummel Figurines & Plates”, the MELs were created as samples only. This one was also produced as HUM 116 – Advent Candlestick, Girl With Fir. This figurine has shown up a number of times as indicated by the one above having a different note on the base. This one, however, has the incised letters “Mel 2”, the transitional markings with both the incised Crown TMK-1 as well as the stamped Full Bee TMK-2 trademarks on a rather flat bottomed base with an earlier German penciled in price of 3.75.

The MEL 2 in this case was located on 1 January 2021 on eBay and the seller of this fine little figurine has a Buy It Now asking price of $232.95 with free shipping from Grove City, Ohio. 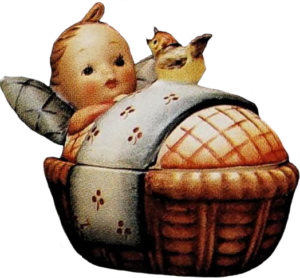 There are at least twenty-nine of a possible fifty-four different numbered MEL pieces known to exist today. Instead of having an inscribed HUM, they show an earlier inscribed MEL along with the mold number. Factory records have two more figurines identified as MEL 6 – Child in Bed Candy Dish and MEL 7 – Tiny Child Angel (sitting on the lid of a candy dish).     This figurine is part of the Donald Deeks Collection held at auction on Saturday, 16 January 2021 in Clearwater, Florida and sold for $425.00. 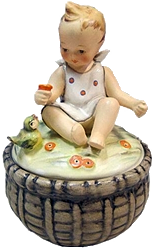 Height – 5½”
Crown TMK-1
Master sculptor Arthur Möeller modeled this lidded candy dish or trinket box with a figural child and bird in 1946. There is no incised M I Hummel signature showing but there is an incised Crown TMK-1 trademark with a “Made in U.S. Zone Germany” on the bottom of the dish. The head has been repaired by Sidmore in July of 1999. MEL 7 was released around 1947 and was adapted from an unknown drawing by Sister Hummel. This small figurine must certainly be categorized as unique at this time with a value in the very high hundreds according to Robert Miller. According to Eagles of War, a transitional TMK-1/TMK-2 MEL 7 recently sold for $1,652.

This MEL figurine was also part of the Donald Deeks Collection held at auction on Saturday, 16 January 2021 in Clearwater, Florida and sold for $550.00. 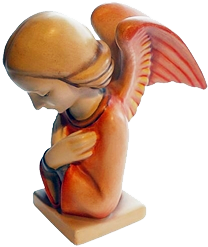 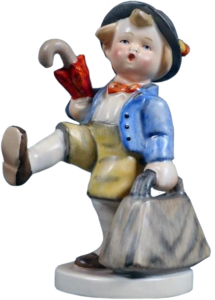 Height – 5″ to 5¼”
Double Crown TMK-1
The two figurines MEL 24 and MEL 25 started off with a MEL designation as many of the earlier figurines did in 1940. With the number 24, you would expect there to be the possibility of finding several more of these early figurines. There are actually at least the probability of finding 54 with this highest number being located so far. This Double Crown TMK-1 highly sought out figurine was modeled by master sculptor Arthur Möeller in 1940 as a Swedish representation and has the same appearance as that of HUM 824. Robert Miller places a value in his 2003 Price Guide at between $10,000 and $15,000. There is one that surfaced recently and has been reported by Eagles of War as being sold for $6,175.

This International figurine is part of the Donald Deeks Collection held at auction on Saturday, 16 January 2021 in Clearwater, Florida and sold for $1,700.00. 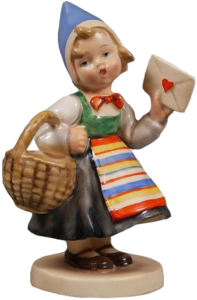 Modeled by Arthur Möeller in 1940 and very similar to the International HUM 832 – Slovakian Girl with Letter in the idea of having a basket on one arm and holding a letter in her hand, this very colorful figurine is instead showing a Mel 25 on the bottom of the base as a possible, early sample to consider. Robert L. Miller has in his 9th Edition of the Price Guide on page 438 that this is also considered to be the HUM 825 (B) figurine. This is part of the Donald Deeks Collection held at auction on Saturday, 16 January 2021 in Clearwater, Florida and sold for $3,500.00.