Here is an interesting idea that you might want to consider or perhaps some of these may give you an idea of your own. This list is simply a suggestion on a selection of Hummel figurines that include those representations of Madonnas. This is a small representative selection of 16 M.I. Hummels that include not only the figurines but also a few wall plaques.  This list begins with the lower number HUMs and increases as you scroll down. It is also, in some ways, an historical chronology of the item as they were created.

Like so many important artists in history, Sister Hummel was deeply religious. She was able to translate her impressions and feelings into paintings of various religious subjects and events, such as her Madonna in Red.  Religious Hummel art is actively collected, despite the present decline in general spiritual involvement, because of her ability to arouse a deep emotional response to her beautiful paintings.

The religious Madonna has long been a favorite religious figurine due in part to the beautiful coloration, perfect rendering, attention to detail …. 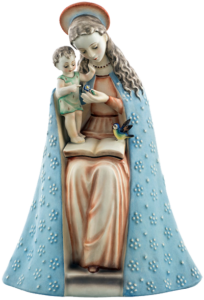 HUM 10 – Flower Madonna
Height – 7½″ – 11½”
This figurine was first created in 1935 by master sculptor Reinhold Unger. Then, in 1956, the mold was renewed by Theo A. Mezenbach and made approximately 2 inches smaller. The halo was changed at that time from the open style to the flat style. It has been produced in white over glaze, pastel blue cloak, brown cloak, ivory cloak and pastel yellow. Also, it has been found in the reddish brown terra cotta finish, signed “M.I. Hummel” with the “crown” trademark in both 10/I and 10/3 sizes. The older color variations will usually range from $2,500 to $3,500 depending on the color, condition and other variations. Old catalogs list this as large as 14 inches. some earlier models appear with only the number 10 and no other size designation. This has also been called the “Sitting Madonna with Child” or “Virgin With Flowers” in some of the old catalogs. It is sometimes seen with an incised 10/3 instead of the 10/III.  Both the 10/I and the 10/III are (TW) Temporarily Withdrawn.

Height – 10¼″ – 15¼”
These two figurines are sometimes called “The Holy Virgin” in some of the older catalogs. There are many size variations as well as color variations being produced in white overglaze, pastel blue, pastel pink, heavy blue and ivory finishes. Also, the figurine has been found in reddish brown terra cotta finish signed “M.I. Hummel” but without the incised number with a height of 11 inches. These were earlier valued at between $2,000 and $3,000. Some pieces have been mismarked 45 instead of 46, etc. and some pieces have been found with 45 and 46 on the same piece. In the Spring of 1982, the large sizes (45/III and 46/III) (both white overglaze finish as well as the colors) were listed by Goebel as “Temporarily Withdrawn,” to possibly be reinstated at a later date. Sometimes, an Arabic size designator is used on the older models. The small sizes (45/0 and 46/0), both in white overglaze finish as well as the colors, were “Temporarily Withdrawn” (TW) from production on 31 December 1984, but may be reinstated at some later date. The medium size (46/I), both in white and in color, were “Temporarily Withdrawn” from production on 31 December 1989, but may also be reinstated at a later date as well. This leaves only the 45/I “Madonna With Halo” in color as an “open edition” in this series at this time. Some “crown” (TM-1) trademark pieces have been found without the usual “M.I. Hummel” signature, but do not have the normal 45 or 46 model numbers.

HUM 48 – Madonna Plaque
Height – 3¼ – 4¾″
This bas-relief plaque was first modeled in 1936 by master sculptor Reinhold Unger. Old crown mark pieces are slightly smaller in size, while newer models have a hole on the back for hanging and the older models have two small holes to use for hanging on the wall with a cord. Sometimes incised 48/2 instead of 48/II and 48/5 instead of 48/V. They were also sold in white overglaze finish at one time in Belgium but are now considered rare. Very early models have a flat back while all others have a recessed back. Large size 48/II was listed as “Temporarily Withdrawn” (TW) from production on 31 December 1984, and the small size 48/0 was “Temporarily Withdrawn” from production on 31 December 1989, but may be reinstated at some later date.

HUM 151 – Madonna Holding Child
Height – 12½″
This figurine was earlier known as the “Madonna with the Blue Cloak.” Modeled by master sculptor Reinhold Unger in 1942, it was produced in five color variations: white overglaze, pastel blue cloak, dark blue cloak, brown cloak, and an ivory finish. This figurine had not been produced for many years but was put back into production in 1977 and was produced in white overglaze and pastel blue only. It may now be found in TM-5 and TM-6 trademarks. The figurine was sold for $44.00 on old 1955 prices lists. “Madonna Holding Child” in both color and white overglaze finish were “Temporarily Withdrawn” from production on 31 December 1989, but may be reinstated at some later date. The figurine has not been found in TM-3 “stylized” or TM-4 “Three line” trademarks. 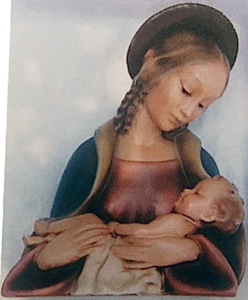 HUM 155 – Madonna with Cloak
Height – 13″
Closed Edition (CE)
This plaque was crafted by master sculptor Reinhold Unger and has been a closed number since 1943. The factory records indicate: “Madonna with cloak, sitting with child on her lap, Reinhold Unger in 1943”. This is listed as a Closed Number on 18 May 1943 with only one known example to exist. It is 13 inches high with an incised “M.I. Hummel” signature and mold number, a TMK-1 Crown mark and “W. Goebel” on the back. Due to it being unique, it is hard to place a value upon this early piece.

HUM 214 A – Virgin Mary
Height – 6¼″ – 6½”
This figurine is part of the smaller size Nativity Set first modeled in 1951 by master sculptor Reinhold Unger and first produced and sold in 1952. At one time, the set was sold together but is also available as individual pieces. It was also sold in white overglaze finish but is no longer sold this way and is considered rare and usually brings a premium. Early pieces of HUM 214 A (Virgin Mary and infant Jesus) was made in one piece but due to production problems, it was later produced as two separate pieces, both with the same number (214 A) incised on the bottom of each piece. The one-piece unit was sold in white overglaze finish as well as in full color finish and both are considered rare today. The nativity set was also produced in terra cotta finish, possibly as experimental only.

HUM 222 – Madonna Plaque, Wall Plaque
Height – 4″x5″
(with metal frame)
Closed Edition (CE)
Originally modeled by master sculptor Reinhold Unger in 1952. There are basically two different styles of metal frames. Found without frame with full be trademark but unconfirmed if actually sold that way. Similar in design to HUM 48 “Madonna Plaque”. Usually found with gray or tan felt backing, which would have to be removed to see the incised number. The number 222 is normally found upside down! 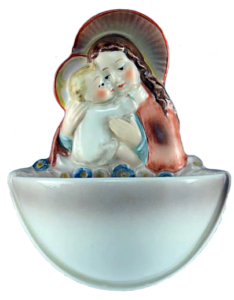 HUM 243 – Holy Water Font, Madonna and Child, Wall Plaque
Height – 3 1/8″x4″
This font was first modeled by master sculptor Reinhold Unger in 1955 and has an incised 1955 copyright date. Apparently, it was not put on the market until the mid-1960s. The earliest catalog listing is found in the 1967 version. No known variations have been recorded.

HUM 247 – Standing Madonna With Child
Height – 11½″ and 13″
Closed Number (CN)
This beautiful Madonna with Child was originally modeled by master sculptor Reinhold Unger in 1955 and restyled in a slightly smaller version by master sculptor Theo R. Menzenbach in 1961. Both versions were rejected by the Siessen Convent for some unknown reason and were never produced as an open edition. At present, there are only the factory samples available, and none have been located in any private collections, yet. If you find one of these, the value of this piece would be well worth investigating further due to the extreme rarity of these rare items.

HUM 249 – Madonna and Child
Height – 6¾″
Wall Plaque in relief
Closed Number (CN)
This wall plaque was made as a sample only and not produced for sale as an open edition. Similar to the HUM 48/V with the exception of a background or a frame. Actually, the piece that was seen was simply a cut-out of HUM 48/V in an unfinished state, with no number or signature on the back, apparently an idea that was rejected or stopped before it was even completed. Possibly the work of master sculptor Reinhold Unger who modeled the first HUM 48 in 1936. It differs from all other known wall plaques except HUM 263, Merry Wanderer. All other plaques have bas-relief figures on a square or rectangular background with an integral ceramic frame. HUM 249 has no background, only the bas-relief of the Madonna and Child as the entire piece. There is no integral ceramic frame. 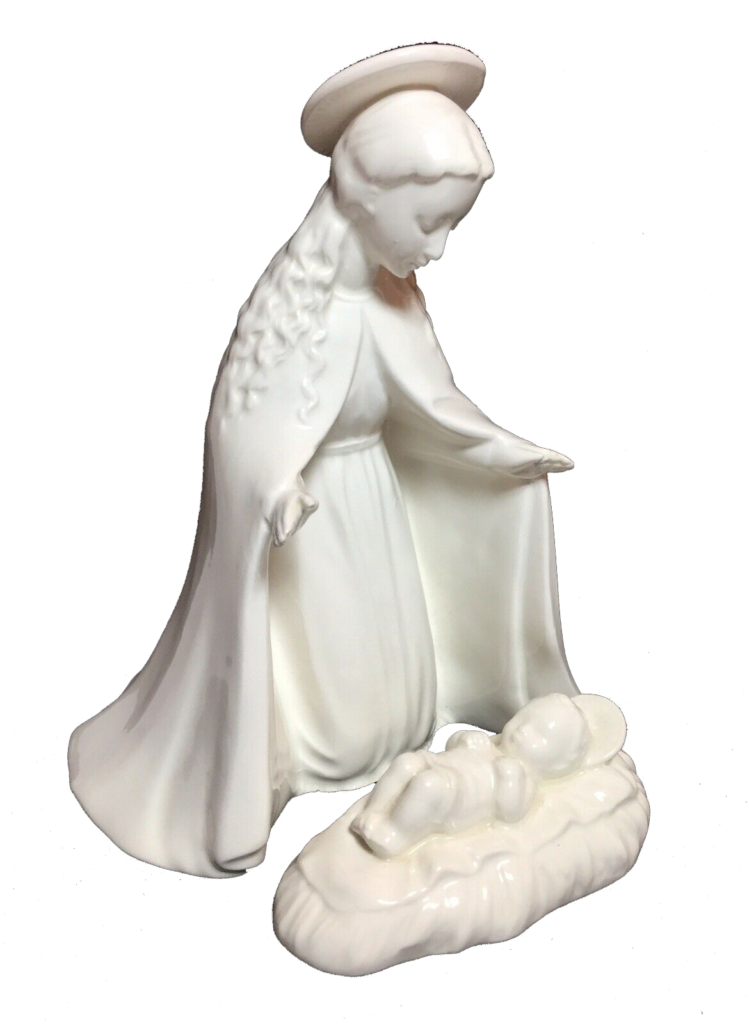 HUM 364 – Supreme Protection
Height – 9″-9¼”
Closed Edition (CE)
Modeled by master sculptor Gerhard Skrobek in 1963, this figurine was originally called “Blessed Madonna and Child” on old factory records but later changed to “Supreme Protection.” First put on the market in 1984 and was limited to the total of that year’s production and will not be produced in future years. It has an incised 1964 copyright date. The inscription on the bottom of the figurine applied by blue decal that reads: “1909-1984 IN CELEBRATION OF THE 75th ANNIVERSARY OF THE BIRTH OF SISTER M.I. HUMMEL” plus the current TM-6 Goebel trademark. Early production of this figurine had an error in the decal that read “M.J. Hummel” rather than “M.I. Hummel.” This was first corrected by cutting off the hook of the “J” on the decal, but still did not completely look like an “I.” Ultimately, corrected to read “M.I. Hummel.” Of the three versions, the most difficult variation to find is the “altered J” variety. The original issue price in 1984 was $150. Originally came in a dark brown, specially designed, padded presentation case with brass fasteners. The box was inscribed: “M.I. Hummel – IN CELEBRATION OF THE 75th ANNIVERSARY OF THE BIRTH OF SISTER MARIA INNOCENTIA HUMMEL” in gold lettering. “Supreme Protection” is now listed as a Closed Edition (CE) and will not be produced again.

HUM 764 – Mission Madonna
Height – 10¼″
Possible Future Edition (PFE)
Modeled by master sculptor Helmut Fischer in 1993, the first example of this figurine was presented to His Eminence John Cardinal O’Connor of New York in 1996. Presently listed on factory records as a Possible Future Edition (PFE) and may be released at some future date, subject to possible minor changes. This figure is very much like HUM 855 below but has an additional two small children sitting at her feet.

HUM 855 – Millennium Madonna
Height – 10¼″
Limited Edition (LE)
Released during the millennium year 2000 in a Limited Edition of 7,500 numbered pieces worldwide, it came in a special hinged, velvet-lined case for safe storage. Modeled by master sculptor Helmut Fischer in 2000. It has a round decal on the bottom with “MILLENNIUM MADONNA” and “In Celebration of Holy Year 2000,” an incised 2000 copyright date along with the TM-8 trademark. The original issue price was $495 in 2000. Similar to HUM 764 “Mission Madonna” (PFE) which was modeled by Helmut Fischer in 1993.