The topic for this page was an obvious choice to have you consider looking for interesting variations and mistakes that make these figurines “rare” and therefore, perhaps more desirable.

As an example of a simple mistake, the following HUM 5 Strolling Along, in an early trademark 2 Full Bee, is one I had not seen before but warrants closer inspection when you are looking over your collection or another that may be for sale. I don’t know if the value is increased due to it having left the factory with this mistake, but it is worth having in your collection to show on those special occasions. See if you can find this mistake as it not quite so obvious. Hint: Check the spelling.

Some of the figurines that show up with mistakes from the factory, could and do at times, bring in higher prices due to the rarity of the item. Here is one example that I doubt I will ever see again but is well worth keeping an eye out for in the future, if you can afford it, that is. This one is HUM 331 Crossroads with both a TMK-3 and a TMK-5 skipping the trademark between. It would appear that the later trademark was added since this figurine has the incised circle to show where to place the earlier trademark and has the black stamped copyright. I have seen a lot of TMK-1 and TMK-2 transitional pieces but would not know what to call this one.  The asking price was $750 plus $14 shipping. 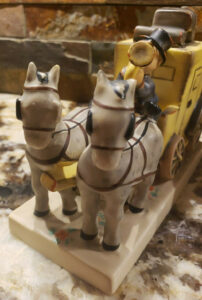 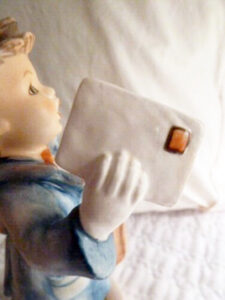 Every now and then, on a rare occasion, you will find an example of a figurine that missed the expert eye of the person in quality control where the paint didn’t cover everything it was supposed to. Here are two such figurines that caught the eye of the collector. See if you can find where the mistakes were made on HUM 226 The Mail Is Here and HUM 119 Postman. When you consider how many figurines have been produced since the first one was introduced, with the number of steps and people it takes to create just one, mistakes have been found, but not very many. When they do, and you are privileged to own one such rarity, consider yourself fortunate to have a great conversation piece. The HUM 226 The Mail Is Here was offered for $169.99 and the HUM 119 Postman had a starting bid of $119.

Not only do you look for errors in the paint applied, but also check how the pieces were put together at the factory. Some of these figurines that made it to the public have brought a lot of attention from the experts in this field as well as a lot of money to be exchanged for ownership of the very rare pieces. One of these is an excellent example of a rare crown marked HUM 99 Eventide to the left where you will notice that the one in error has the sheep directly in front of the children. For comparison, the one with the sheep to the children’s left is correct. 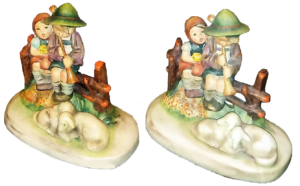 I was lucky to find an example of less extreme in one of my TMK-2 HUM 99 Eventide of misplaced sheep.  The little boy, in this example, has his left foot sitting squarely on the head of one of the sheep. You may also notice that there is more room from the edge of the base in one and not in the other.   Although the one I have is clearly not as valuable as the other photograph shows, it does indicate the variation you can find from one figurine and another. It did however, generate a bit of fun conversation at one of the Hummel club meetings I attended.

One of my favorite figurines is HUM 71 Stormy Weather in the larger 6¾ inch size. I have a few of this figurine in different trademarks but noticed that one of the TMK-1/TMK-2 transitional pieces had the umbrella handle pointed outward, all the rest had the handle angled away from the little girl. There were other differences in this certain Story Weather as well. He was missing the vertical straps to hold up his pants and the flowers were quite different as well. Also, the little girls right pig tail was positioned at a different angle as well.  I took this one and another “normal” TMK-1 Crown figurine to a Hummel Club meeting and it was decided that it was possible this was an earlier sample from the beginning of this model HUM 71 and when World War II ended, Goebel may have been desperate in finding pieces they could sell, found this one tucked away on a shelf and marked it with the Full Bee stamp along with the incised Crown not noticing or disregarding the differences between it and the more “up-to-date” examples. Maybe or maybe not, but it sounds possible.

I found this example to your left that does have the regular lederhosen straps as well as the same flower but the handle is pointed out and the girl’s hair is different.  You will also find that the newer and smaller HUM 71 2/0 Stormy Weather versions have the umbrella handle pointed out much like my earlier version of this figurine. I will add a photograph of my “strange” figurine when time allows.

The famous authors and Hummel collectors, Robert and Ruth Miller, made famous a good number of variants within the vast number of figurines produced. There is even an article in the 1996 Winter Hummel Insights magazine, “How Does He Like His M.I. Hummels? . . . Rare!” to describe this. The Millers quickly brought worldwide attention to an “International” set of figurines they located and helped to determine a hefty price as to their value. Here are a few of those you may find if you are lucky and have a sharp eye for this type of figurine. The second Goose Girl, Hum 947, sold at auction for $3,910 and the Hum 968 Lost Sheep sold for $3,335. There are many more like these but there were only one or a few produced of each as we understand.

Variations – As mentioned above, I found an interesting example of the figurine HUM-99 Eventide in an earlier trademark where one of the sheep didn’t have their tail flush with the edge of the base as indicated in all of the catalogs and books I have access to. Here is a comparison of a difference between the two in my collection where you can see that the little boy in the left side actually has his left foot resting squarely on the head of one of the sheep. Compare the foot placement to the other to the right. This is the only one I have found like this. Both of these figurines are TMK-2 Full Bees and are a topic of fun discussion when guests visit. 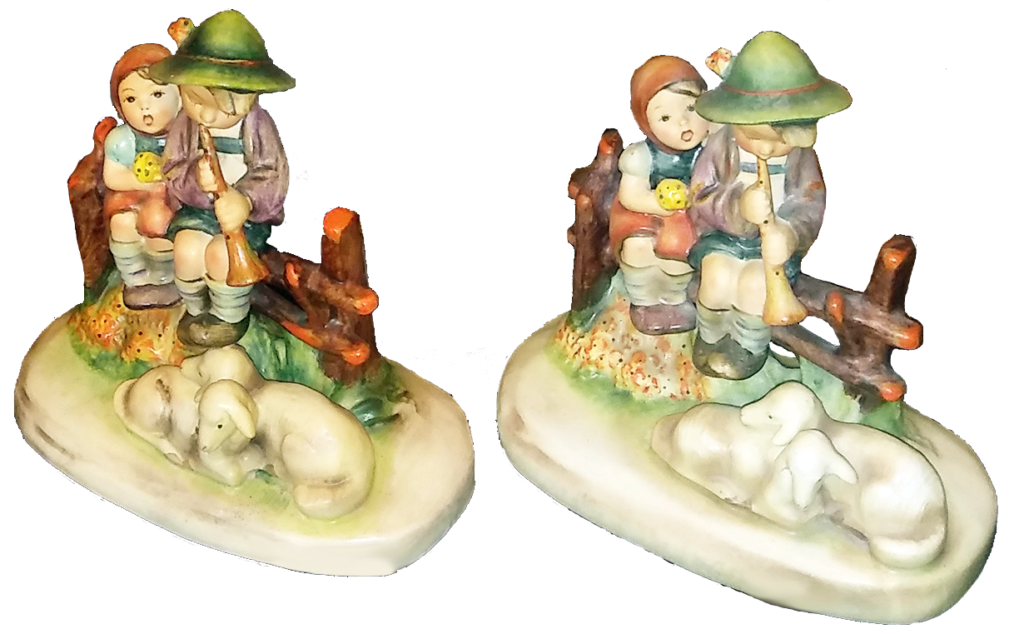 Invaluable. (n.d.). Everything You Need to Know About Hummel Figurines, International Figurines. Received 4 October 2019 from https://www.invaluable.com/blog/inside-the-archives-hummel-figurine-prices/.